I’ve been working away for the last few weeks, which has meant that my development has had to take into account that it is being done primarily in bars an restaurants. I know many of you are waiting for the latest version of The Lords of Midnight, but although I have spent some time fixing bugs and adding a few new features, I am not in a position to Build a release version. I have to have access to my desktop to do that, and the few days I’ve spent at home with my family, I hope you can understand that spending time in my study on my computer is not the highest order of the day.

After declaring an end to any changes to Lords of Midnight, I spent some time merging the codebases of the different versions that have been branched out over the the year. Namely, Mobile version, Desktop Version, and Doomdark’s Revenge. I now have a unified code base which means that when I release a update for LoM soon, it can be across all formats.

Once the merge was complete I decided to spend some time working on Doomdark’s Revenge. I am hoping to release a test version soon. The night AI will not be activated but you will be able to wander around the map, above and below ground. And generally check out the UI differences between the games etc. This will then give me a good base to slowly turn on AI features and test them thoroughly up to release later this year. For the record that would be in about 12 weeks!

Once area that I have been working on this week, is tunnels. Tunnels are one of the new features that Doomdark’s Revenge implemented. So I have been slowly working my way through the code base, adding in all the little things that need to be there in order for them to work.

It’s a little different with The Midnight Engine, ( which by the way is the underlying code that powers both The Lords of Midnight and Doomdark’s Revenge ), over the original games, in that there is one code base. Doomdark’s Revenge was released as completely new game, and therefore much of what didn’t remain of The Lords of Midnight was just removed and the new code was added. This is a big issue with my codebase, as my original brief for creating The Midnight Engine was to be able to play both games and in theory create a game that mixes the features from both LoM and DDR. So, if we take tunnels as an example, I could just turn tunnels on in LoM, and everything would just work.

Now, let me try and give you an example of why that thought process gives me a nightmare when implementing something like tunnels.

In LoM a map location is split up into [ Terrain, Area, Object, Flags ], in DDR it is just [ Terrain, Flags ] – both area and object are generated. TME uses an expanded format [ Terrain, Variant, Area, Climate, Flags, Object ]. So the generated areas in DDR are stored, as are the objects. ( For the record, objects change every night ). For both, objects are classed as things you find or things you see. So Guidance, Cup of Dreams, Dragons, etc…

Now tunnels are a flag. A location has a tunnel beneath it or it doesn’t. If the terrain is GATE, PIT, PALACE, CITY, then the tunnel is an entrance/exit. If the terrain is PLAINS, FOREST, HILLS, MOUNTAINS, then it is considered a passageway. Now, this is where things start to get messy.

It seems a pretty straight forward thing to think about, but when your code base works on the concept of a single location, suddenly everything changes.

When drawing the landscape, the frontend asks the backend for the information about a given location. It draws the terrain graphics and any critter imagery that is required. The backend has just told the front end that there is a critter at this location. However, now it has to consider if we are above or below ground, and the type of below ground we are on. Based on that information the frontend can decide if that critter is visible or not.

When at a given location the frontend asks the backend for all the lords that are at a given location. But now it has to consider if that lord is above or below ground. The list of these types of checks goes on and I’ve found myself having to work through the engine making sure that I am always using the correct context. More importantly I am trying to make sure that any logic is in the backend and not in the frontend. Therefore the backend now returns the information in the form of, here is the information at the location requested, this critter is above ground and this critter is below ground. It doesn’t matter that there can’t be a critter in both, that is a backend problem not a frontend one.

A similar thing happens with the discovery map. There are flags on a location to say that it has been seen, looked at, or visited. Seen is a distance thing. Two locations away may have been seen, and you know what terrain is there because you can see it on the landscaping view in front of you, but you might not know what it is called. Looked at is for locations directly in front. You know the terrain and the name. Finally, visited is exactly that, you have stood on that piece of ground. But, you might not have stood under that piece of ground. So now we have to introduce the concept of tunnel visited and tunnel looked at. How about, we have walked down a tunnel and got to the end, and we know the tunnel finishes, as opposed to not quite making it to the end, so we have looked at the tunnel location in front, but because we didn’t visit it, we don’t know if the location after that continues as a tunnel, or this is indeed the end of the tunnel.

That one bit flag in DDR ‘tunnel’ suddenly becomes so much more when you are trying to keep a flexible engine. That one bit flag also creates limitations. Two tunnels adjacent to each other must be connected. You can’t run a tunnel under a palace because a palace is always an exit/entrance. This is used to create a one way tunnel in the game.

I have considered removing the bit flag, and replacing it with the concept of layered maps. You would then have a map for all the terrain above ground and then a map for all the terrain below ground. Following that approach would me that the limitations could be removed and it would allow things like different critters above ground than below. Or types of tunnels. But for now, I’ll leave well alone!

Other things have crawled out of the subterranean landscape… For example, two characters at the same location are not actually at the same location when one is above ground and one is below ground. Thus, the newly added grouping functionality suddenly needs to take into account tunnels! 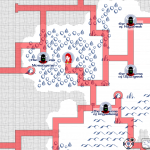 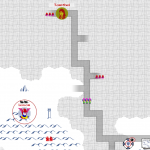 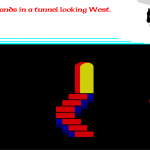 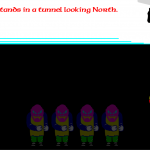