One thing that got carried over from the original Midnight Engine was the shading of the landscape depending on the time of day. The original Lords of Midnight, has a different colour for night which is basically that all the white becomes black, but the blue remains the same.

In TME and therefore the remake, I have a tint colour for each time of the day, and the images are tinted toward that colour. That colour is generally a shade of grey and it is used to darken the dawn, brighten up to normal colours around midday, and then dark off fully to night. In reality, this is one area of the remake that I left in that I don’t like. Only because, it doesn’t really look like the original. The night view has a very distinctive look, and as you can see though, the remake doesn’t look the same. It’s fine as things goes, but I would have much rather made it look more like the original. 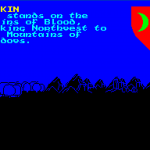 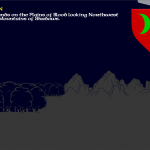 Doomdark’s Revenge however has a completely different approach. There is a dawn visual, and day visual, and a night visual. 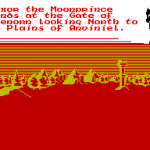 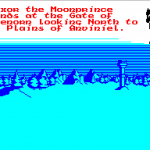 I knew therefore that when I got around to releasing Doomdark’s Revenge, I was going to have to deal with this issue. The tinting method just didn’t cut it. Because I could tint to red, or tint to yellow, but not combine them.

To give you a little background. The colour changing was relatively easy on the ZX Spectrum. Partly because the images were very simple and were constructed, but also because of the way that the spectrum only had two colours in a 8×8 grid – known as the paper and ink. So all the effects were done by just changing the paper and the ink. These colours were not stored with the bitmap either, it was a different memory area. So in fact, what Lords of Midnight does is, clear the screen with paper and ink both white, draw all the pixels to the screen, which you can’t see, and then fills in the paper and ink colours which makes the screen appear.

Now, the choice I made when porting the game was to use full 24bit alpha’d bitmap images. I can discuss the merits, and the whys, and possibly the mistakes, of this decision. But, it’s not been one I can change easily.

The upshot is: changing colours on the fly isn’t easy. It’s much easier with 8bit palletised images. But believe it or not, despite the fact that the terrain images only use two colours, they actually use at least 255 colours in order to get smooth edges, as well as being alpha’d. Changing to palletised images just made it look awful.

Once solution that I knew could work would be to write a custom shader. Shaders are dark voodoo magic that happen on the graphics card. And I’ve never written one in my life. Had Mike been around, he would have knocked one out very quickly. But obviously he wasn’t, and as I was heading toward the original release of The Lords of Midnight, I didn’t have time to look into them.

Now however, I couldn’t ignore it any longer. With the latest update of The Lords of Midnight sat awaiting approval from the platform holders, I turned my attention back to Doomdark’s Revenge, and the next thing to address, was making the dawn landscape look proper. I was going to have to learn to write shaders. And that’s what I spent yesterday doing.

The end result is that I now create all my terrain images as being black and white. These two colours will be replaced by the shader as the image is being drawn to screen. However, I can’t just replace the two colours, I need to make sure that I where the two colours meet they get blended. Now, it’s not rocket surgery, there’s nothing particularly clever going on here, but for me I had to turn this into a shader, and that was new territory.  However, working within the Marmalade SDK and using the OpenGL ES shader reference manual, and a little bit of google… the process turned out a little easier than I expected.

Here is the landscape without the shader active. But with the shader active, and the two colours adjusted depending on the time of day, we  get the following. 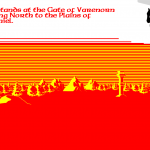 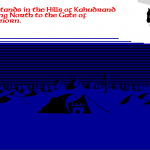 And, if we now revisit The Lords of Midnight, we get the resulting night landscape that I always wanted. Not sure when this will make it back into the current release, probably after Doomdark’s Revenge is released and I’ve been able to fully test the shader across multiple platforms. But it will make it back.

4 thoughts on “Shading the night sky…”